The courage of our convictions 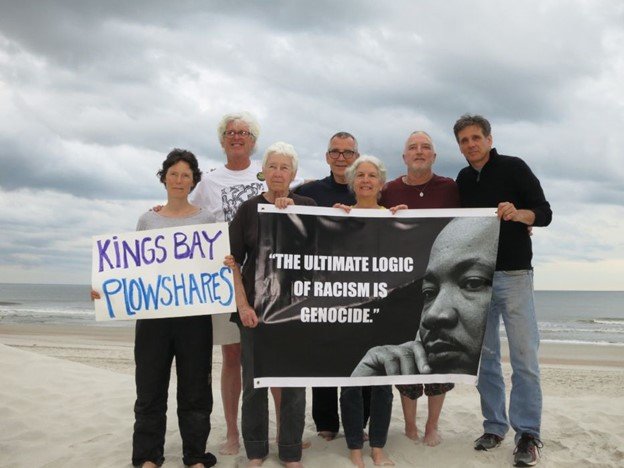 What does it mean to have the courage of our convictions?

Last week, Rev. Stephen M. Kelly, a 71-year-old Catholic priest, was sentenced in federal court to almost three years in prison. What was his crime? He was part of a Ploughshares group protesting of U.S. nuclear weapons policy that took place at a Georgia naval base in 2018.  The National Catholic Reporter (10/16/2020) reported that “Kelly described himself in a pre-sentence statement as a ‘prisoner of conscience for Christ,’ and one who preaches against ‘the sin that flourishes in weapons of mass destruction.’” The article also reported that Kelly “said he was not concerned with the effectiveness of his protest, but rather with being faithful to his Christian calling,” citing the call to beat our swords into ploughshares (Isaiah 2:4) which inspired the Ploughshares name as originally founded by Daniel Berrigan.

The picture is of the dangerous miscreants before they began their action, with Kelly in the center in glasses. Conviction is an interesting word – Kelly was convicted in criminal court, but he was in court because of his conviction of what God demanded of him. Those convictions have led him to spend at least a decade in prison, including six years in solitary confinement.

Rev. Kelly is the latest of many role models of pacifists who put their own freedom, safety and even lives on the line to try to stop the killing. I remember years ago doing an annual presentation for high school aged kids at my church along with a very honorable member of the military. He regularly said that, while war is certainly always a sad development, some things are worth dying for. And my response was that some things indeed are worth dying for, but for me, that does not mean they are worthy of killing for.

What are you called to do to prevent war and reduce the risk of catastrophic use of nuclear weapons? What cost are you willing to incur? What does it mean, for each of us, to have the courage of our convictions?