The biggest bomb of them all — Tsar Bomba 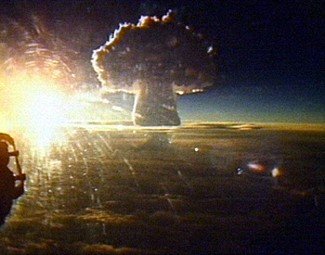 Of course, most people know that the atomic bomb that destroyed Hiroshima in an instant was small compared to the nuclear weapons developed in the years since.  The scale of the difference is truly shocking. Not only have nuclear weapons continued to multiply and to spread to more countries, but they have grown in destructive power – by some estimates, today’s nuclear weapons are 3000 times more destructive than “Little Boy,” the Hiroshima bomb.

What I did not know until now was the story of the most powerful nuclear bomb ever detonated. The September 11, 2020 issue of War History Online reports on newly declassified materials, including 40 minutes of film footage, of the test explosion of a 50-megaton weapon, nicknamed Tsar Bomba. The 1961 explosion took place over islands in the Arctic Ocean. The declassified Russian information indicates that Nikita Khrushchev actually wanted a 100-megaton payload but scientists reduced it by half. The largest bomb tested by the US was 15 megatons.